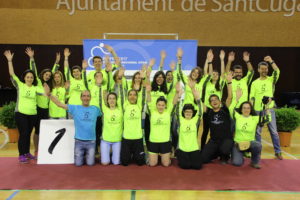 Do you want to volunteer at the 2020 IFCPF Nations Championship & Female World Cup ?

Sant Cugat will be the world football center for people with cerebral palsy, from June 20 to July 2, with the dispute of the Women’s World Cup, the Women’s 1st World Cup, and the Men’s Nations Championships, a test that gives points for the 202 World Cup. The ZEM Jaume Tubau will host the competition that will bring together more than twenty teams. The tournament will be organized by the Catalan Sports Federation of Cerebral Palsy (FECPC) and the International Football Federation with Cerebral Palsy (IFCPF). participate from Ireland, Northern Ireland, Thailand and South Korea. This World Cup B of selections will allow to climb the first place in the World Cup A, top 8. The champion will also add 12 points for the world ranking. The competition will take place between June 20, the opening ceremony and the first match, and July 1 will be the final.

In the women’s category, the 1st World Cup is organized with the participation of Denmark, Japan, the United States, Spain and possible participation of Argentina and the Netherlands. The championship starts on June 28 and ends on July 2 with the final. The director of the tournament, Carles Teixidó, emphasizes that organizing this first edition is a success and places Sant Cugat on the world map. The organization is also asking for help to get between 120 and 150 volunteers for the championship.

Thank you very much for your collaboration!